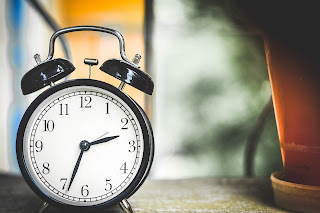 There are several timeout parameters in Pgpool-II. In this blog I will explain those parameters used for connection management.  Below is a figure describing such a few parameters. Pgpool-II spawns child process (the number of process is defined by num_init_children parameter) at the startup time. Each child process takes care of client connections and backend connections to the PostgreSQL database. 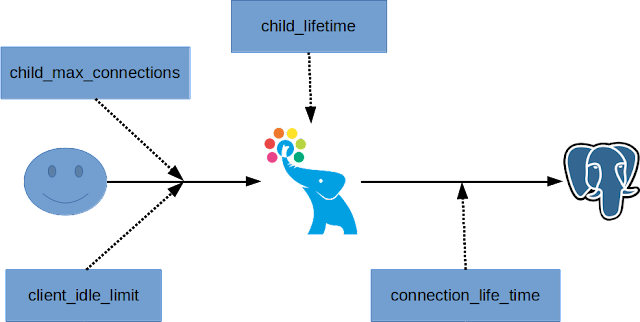 First of all there are two connections. One is between clients and Pgpool-II. The other is between Pgpool-II and PostgreSQL. So you should recognize which parameter affects which connection.

This parameter controls the lifetime of Pgpool-II process. Since connections to/from clients and PostgreSQL are in the process, all connections will disappear when the process exits. A benefit to enable the parameter is to free out memories used by the Pgpool-II process. For example, Pgpool-II needs to allocate memory to hold message data sent from client. That could be large if table row is wide. Of course the memory used by the message is freed after the communication is done. But it does not actually free out memory from process space. So occasional process exit and restart may be good for applications which could handle large messages. Note that when Pgpool-II process exits, corresponding PostgreSQL also exits.

The timer for the parameter starts when no connections from clients exist. For a busy system the timer may not be triggered because next client connection arrives as soon as former client exits. In this case you may want to use child_max_connections parameter.

If you want to know how old the process is, you can use pcp_proc_info command or show pool_processes SQL command to examine the "start time" field.

Unfortunately currently there's no metrics to know how many connections from client have been made to a Pgpool-II process.

If you want to know how old the connection caches are, you can use pcp_proc_info command or show pool_processes SQL command to examine the "Creation time" field.

You can control the connection lifetime parameters to save resource of the system. For a systems which are not so busy, you can leave those parameters as default. However if your system getting busy you might want to tweak them. Hope this blog entry is useful for busy systems.

Email ThisBlogThis!Share to TwitterShare to FacebookShare to Pinterest
Labels: pgpool-II

Using IVM in a docker container

In  this blog entry I have introduced the ongoing project: Incremental View Maintenance (IVM), which allows to real time, fast update of materialized views. Since the bolg, IVM now can handle outer joins and self joins. The out come of the project is in public in a form of set of patches against git master branch of PostgreSQL. Also a GitHub repository for this project is in public as well.

So skilled PostgreSQL developers can test IVM today. However it's not that easy for people who do not regularly compile and build PostgreSQL and IVM from source code. Fortunately one of IVM developers "Yugo Nagata" comes up and starts to provide complete docker image of IVM. I am going to demonstrate how to use it step by step.

IVM has been continuously developed. Now it can be easily tested in a docker container. Please try it out!
at December 02, 2020 No comments:

Upcoming Pgpool-II uses more appropriate language for some technical terms. This has been already done in PostgreSQL. Pgpool-II developers think it's a good thing and decided to follow the way. Actual work has been done by Umar Hayat. Challenge is we have to fix not only documentations but configuration parameters and programs. As a result, his patch was quite large: 159 files have been changed, over 2,000 lines were modified.

Pgpool-II has a mode which allows replication by sending identical SQL statement to PostgreSQL servers (thus no streaming replication configuration is neccessary). This mode is called "native replication mode". In this mode "master" (which is the first PostgreSQL node) and "slave" are used to represent the roll of each PostgreSQL server. Pgpool-II 4.2 will use "main" and "replica" instead.

Watchdog is the feature to avoid Pgpool-II's single point of failure. When deploying multiple Pgpool-II servers, they talk each other so that they can elect new leader server when former leader server goes down. We historically called the leader server as "master" and rest of the server as "standby". Now Pgpool-II uses "leader" instead of "master".

The language cleanup may make users migration process from older version of Pgpool-II a little bit harder. But this should have been done someday, and Pgpool-II developers are proud of doing that in this release.

See preview of 4.2 release note for more details (we expect to have Pgpool-II 4.2 release in October 2020). 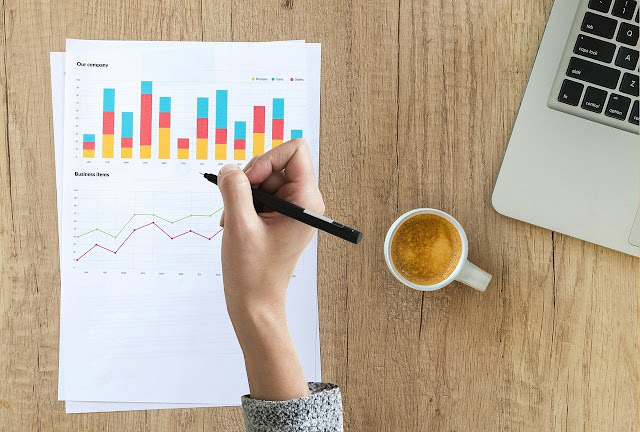 Upcoming Pgpool-II 4.2 will provide new statistics data such as number of INSERT/DELETE/UPDATE etc.  to you. In this blog I will show you how it will look like.

Before jumping into the new feature, let's take a look at existing statistics data. PostgreSQL already gives you tuple access data like number of tuples inserted in a database (see pg_stat_database manual). Before Pgpoool-II 4.1 or before gives number of SELECT sent to PostgreSQL in "show pool_nodes" command.

Here is an example of the new statistics data:

Please note that these counts are counted up even if an SQL command fails or roll backed.

The "show pool_backend_stats" gives you at a glance view of whole cluster statistics on number SQL commands issued. Moreover, error counts, which does not exists in PostgreSQL could be useful for those who are interested in database or application failures.

Pgpool-II developers have been working hard for upcoming Pgpool-II 4.2 release, which is supposed to be released around this September or October.

For the new release I have just added new clustering mode called "Snapshot isolation mode", which would be not only interesting for Pgpool-II users but PostgreSQL users and I think I decided to write about it in this blog.

Until Pgpool-II 4.1, we have following clustering mode:
The new "Snapshot isolation mode" is pretty close to the existing native replication mode. It does not use the streaming replication at all. Replication is done by sending DML/DDL statements to all the PostgreSQL servers.  If so, what's the difference?

Before explaining that I would like to talk about the background a little bit.

PostgreSQL developers has been discussing about technology which can scale to handle large data. One of such a technical directions is extending FDW (Foreign Data Wrapper). It sends query to another PostgreSQL server to replicate or shard data. The idea is similar to the native replication mode in Pgpool-II because it also sends DML/DDL to servers to replicate data.

As for replicating data, they look good so far. However, there is a problem when multiple sessions try to access data at the same time.

So after session 1 and session 2 end, table "log" should have exactly same sequential numbers like "0, 1, 2, 3...." on both PostgreSQL servers. But see the example session below:

Session 1 executed UPDATE at t1 on servers1, while on server 2 UPDATE was executed on t2. Session 2 executed INSERT at t3 with value 1. Unfortunately on server2 INSERT was executed at t3, and t1 was not updated yet thus the value used was 0.

So after the sessions end, we will see different sequences of numbers in log table on server1 and server2. If we do not have atomic visibility this kind of data inconsistency could happen. Atomic visibility guarantees that value can be seen on server1 and server2 are same as long as they are executed in a same session. In the example above, data logged into log table would be either 0 (t1 has not been updated/committed yet) or 1 (t1 has been already updated/committed).

How to achieve atomic visibility?

Pgpool-II uses completely different approach, which is called "Pangea" proposed in an academic paper. With Pangea, no modification is necessary with PostgreSQL. Even you can use older versions of PostgreSQL like 8.0. So you can enjoy snapshot isolation mode of Pgpool-II today with your favorite version of PostgreSQL.

In Pagea the idea is called Global Snapshot Isolation, which extends snapshot isolation of local server to across servers. That's the reason why we call the new clustering mode as "Snapshot Isolation mode".

With Pangea each first command in a transaction needs to wait if other transactions are trying to commit. If there are no commit is ongoing, the command will get snapshot which defines the visibility of the transaction. Since local transactions on each server acquire snapshots while there are no committing transactions, they can be regarded as consistent. In the example above, the INSERT command in session 2 will be forced to wait until t4, and at that time session 1 commits. Thus each INSERT command in session 2 will see "1" in table t1. Same thing can be said to the commit. Commit must wait if there's ongoing snapshot acquisition.